Macrophages are innate immune cells characterized by evolutionarily conserved functions, such as host defense against infection and tissue homeostasis. Macrophages present a high plasticity grade, being able to change their phenotype in response to environmental stimuli. They play central roles during development, homeostatic tissue processes, tissue repair, and immunity. Furthermore, it is recognized that macrophages are involved in chronic inflammation and that they play central roles in many diseases, including cancers, autoimmune diseases, cardiovascular diseases and tuberculosis. 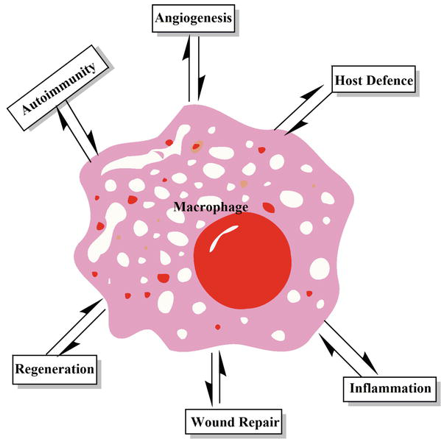 Inflammatory cells have been recognized as a key component of the tumor microenvironment (TME), which is composed of proliferating cancer cells, stromal cells, and infiltrating immune cells, plays a critical role in cancer development, progression, and control. Macrophages are the dominant portion of infiltrating leukocytes in all tumors. Tumor-associated macrophages (TAMs) are the key cells that create an immunosuppressive TME by producing cytokines, chemokines, growth factors, and triggering the inhibitory immune checkpoint proteins release in T cells. TAMs participate in both tumor initiation, development and progression, promoting angiogenesis and tumor spreading at distant sites and creating an immunosuppressive environment. Preclinical and clinical data have shown that a prevalence of TAMs is associated with a worse overall prognosis in a high proportion of solid tumors, such as breast cancer, ovarian cancer, and melanoma, etc.

Macrophages play major roles in the pathogenesis of a variety of autoimmune diseases including Rheumatoid Arthritis (Ra), Inflammatory Bowel Disease (Ibd), Multiple Sclerosis (Ms), Systemic Lupus Erythematous (Sle), and Type 1 Diabetes (T1D). In these diseases, their contribution varies greatly in different situations and is controlled by many factors. Moreover, macrophages are an important source of many of the key inflammatory cytokines, which have been identified as important drivers of autoimmune inflammation, including interleukin (IL)-12, IL-18, IL-23, and tumor necrosis factor α (TNFα). While there is substantial evidence supporting roles for inflammatory macrophages in autoimmune inflammation, numerous studies have also reported suppressive roles for macrophages. These observations indicate that how changes in macrophage differentiation in the local milieu can play a decisive role in the pathogenesis of a wide variety of autoimmune diseases.

Macrophages have a key functional role in the pathogenesis of various cardiovascular diseases, such as atherosclerosis and aortic aneurysms. Their accumulation within the vessel wall leads to sustained local inflammatory responses characterized by secretion of chemokines, cytokines, and matrix protein degrading enzymes. In cardiovascular disease, macrophages may exist in a spectrum of activation states rather than the simple M1 and M2 polarization states. The recent advances in single-cell RNA sequencing have improved the understanding the snapshot of macrophage heterogeneity in human and experimental plaques.

Mycobacterium tuberculosis (Mtb), the etiological agent of human tuberculosis, is acquired by the respiratory route and has plagued humans for thousands of years. TB remains one of the greatest threats to human health. Alveolar macrophages (AMs) are the first cells in the lung to be infected with Mtb after aerosol transmission. Although macrophages are known as professional killers for pathogens, Mtb has adopted remarkable strategies to circumvent host defenses, building suitable conditions to survive and proliferate. Comprehension of the molecular mechanism of Mtb survival within macrophages is fundamental for the improvement of vaccine-based and therapeutic strategies to fight against Mtb. 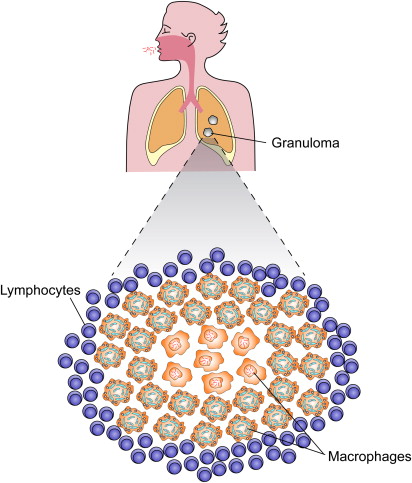 Fig.2 Infection with Mtb: establishment of a balance. (Pieters, 2008)

Despite macrophages being characterized by an elevated grade of plasticity, they have been the interest of researchers as potential therapeutic targets. They can acquire different phenotypes, frequently overlapping each other, in response to the continuous environmental stimuli they are subjected to. To manipulate macrophages, several strategies have been adopted, and macrophage depletion and reprogramming are considered to be the most important methods. Macrophage Depletion is based on the use of either depleting antibodies, such as anti-colony-stimulating factor 1 receptor (CSF1R), or molecules exerting specific toxicity against macrophages, such as bisphosphonates and trabectedin. While Macrophage Reprogramming is a less radical approach used to block macrophages without killing them. Regulation of cell homeostasis under pathological conditions by modulating macrophage behaviors in the affected tissues and organs is an important prospect of modern biomedicine. Reprogramming macrophages is one of such interventions and one of the most promising strategies realized in the field of anticancer therapy, aimed at re-programming M2-like, protumor TAMs to M1-like macrophages.

Creative Biolabs is committed to providing overall solutions for macrophage development, focusing on innovative research. Our team offer a wide range of high-quality services including but not limited to:

For more detailed information, please feel free to contact us or send us your inquiry or question.